An Amur leopard sits in the snow at Mulhouse Zoo in France.
Photographer: Sebastien Bozon/AFP/Getty Images

South Korea will draft guidelines to protect wildlife and their habitats in the heavily fortified Demilitarized Zone separating it from North Korea as the two countries ease their decades-long military standoff in the area.

The South Korean Environment Ministry plans to announce measures to protect the ecosystem of the DMZ and preserve critical habitat in surrounding areas sometime this year before any development takes place in the border areas.

“The DMZ and the surrounding areas have high ecological significance with biodiversity. It should be protected under a legal boundary,” said Lee Jong-seon, an official at the environment ministry’s nature and ecology policy division.

The DMZ was established as a buffer zone between North Korea and South Korea following the 1953 truce ending the Korean War. It divides the Korean Peninsula approximately in half and is about 250 kilometers (155 miles) long and 4 kilometers (2.5 miles) wide.

South Korea is planning a series of discussions with relevant government agencies, including the Defense and Interior ministries, along with environment experts and activists, through May before finalizing conservation measures.

“It feels a bit late to start the discussions now when a lot of development proposals are being pushed. But it’s a high priority to formulate guidelines to protect the ecosystems of the DMZ. The area is of high importance globally and the South Korean government should come up with laws and regulations to protect the area,” said Seo Jae-chul of Green Korea, a Seoul-based nonprofit environment organization.

Even though an unknown number of abandoned land mines are scattered throughout the area, the zone was relatively insulated from human activity for more than 65 years and became a haven for wildlife and plants. 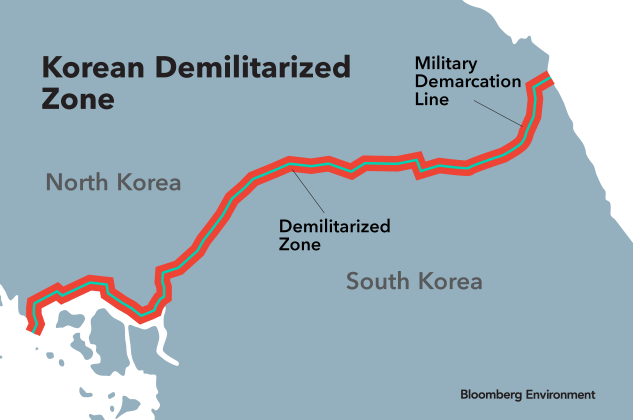 More than 5,000 animal and plant species have been identified in the area, including the long-tailed goral wild goat, Asian black bear, and Northern fur seal, according to the environment ministry. The World Wildlife Fund also believes there may be a few critically endangered Amur leopards in the zone.

Local councils, as well as South Korea’s central government, are reviewing a slew of development plans to transform the area into a special tourism zone or park to help economic and humanitarian exchanges between the two countries.

The leaders of North and South Korea met last year in an effort to begin easing tensions along the border, and some landmines have since been removed.

Efforts have been underway to preserve areas near the DMZ.

In September, South Korea’s forested Gangwon province, where the eastern part of the DMZ is located, applied to join the U.N.'s global network of Biosphere Reserves for 182,815 hectares (706 square miles) of land that span its five counties.

If the relationship improves further, South Korea wants to make a joint bid with North Korea for the UNESCO Biosphere Reserves status, according to the environment ministry.

South Korea will continue to hold a series of discussions with relevant government agencies, including the defense ministry and interior ministry along with environment experts and activists, until May before finalizing its conservation measures.

“It’s the first time that various government agencies and members of society take part to come up with conservation plans for the DMZ,” said Lee.

To contact the reporter on this story: Wooyoung Lee in Seoul at correspondents@bloomberglaw.com