Climate change is brewing up a global beer shortage, potentially drying up taps and spiking the cost of a pint, according to University of East Anglia research published Oct. 15.

U.S. consumers could see a price increase of about 34 percent.

The heat and higher prices could lead to as much as a 16 percent decline in beer consumption worldwide and about 14 percent in the U.S. in years when the effects of climate change are most extreme, according to the study. 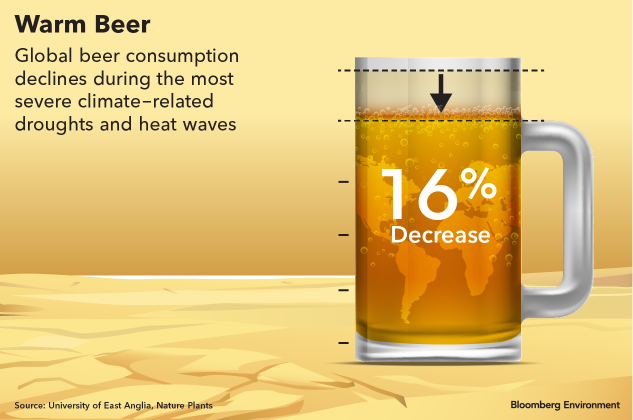 Previous research has shown that climate change also threatens wine grapes and coffee, but until now, researchers haven’t focused on how global warming may impact other “luxury” crops, including barley. Most of the world’s barley is produced for animal feed and beer production.

The impacts of climate change on beer will be substantially less severe if greenhouse gas emissions are cut from their current trajectory, according to the study.

“While the effects on beer may seem modest in comparison to many of the other—some life-threatening—impacts of climate change, there is nonetheless something fundamental in the cross-cultural appreciation of beer,” study lead author Dabo Guan, a climate change economics professor at the University of East Anglia in the United Kingdom, told Bloomberg Environment.

“Some of the general population may not care about climate change or [its] impact, but if we’re saying it’s going to affect their daily life or their lifestyles or social-stability issues, then people may stop to think,” Guan said.

The brewing industry says it’s doing what it can to adapt to climate change.

Anheuser-Busch InBev is breeding drought and disease-resistant varieties of barley and growing winter barley that can be planted in the fall and harvested in the spring in order to adapt to a warming world, Jess Newman, the company’s director of U.S. agronomy, told Bloomberg Environment.

“As extreme weather circumstances grow on the planet, we may see barley growing regions shift, but they will be replaced by other growing areas,” Gatza said.

The Brewers Association is working with barley and hops growers to promote sustainable growing practices that help reduce water consumption, he said.

The industry understands that it’s vulnerable to climate change and must adapt, Newman said.

“We know big changes are coming,” she said. “Our focus is on being prepared and investing in our growers.”