Boat docks sit on what used to be the bottom of Lake Mead at the abandoned Echo Bay Marina in Overton, Nev., on June 4, 2015. Drought that reduced Lake Mead was one of the impacts mentioned in the Fourth National Climate Assessment.
Photographer: David Paul Morris/Bloomberg via Getty Images

Trump administration officials’ reaction to a major federal climate report may be the most scrutinized, but the authors and reviewers have another audience in mind: state and local policymakers.

The U.S. Global Change Research Program unveiled the report, the fourth installment of the National Climate Assessment, on Nov. 23. The document, required by law every four years, was written by a team of scientists from 13 agencies—including the Environmental Protection Agency, NASA, and the National Oceanic and Atmospheric Administration—and nonfederal scientists.

The assessment states explicitly that the Earth’s climate is changing faster than ever in the history of modern civilization, predominantly due to human activity.

The U.S. is already experiencing the effects of climate change, and those effects will intensify, but the severity will depend on actions taken to reduce greenhouse gas emissions and adapt to the changes that are unavoidable.

“A growing number of states, cities, and businesses have pursued or expanded on efforts to reduce greenhouse gas emissions. The scale of adaptation has increased,” David Easterling, who directs the technical support unit for NOAA’s National Centers for Environmental Information, told reporters Nov. 23.

But these efforts haven’t yet reached “a scale needed to avoid substantial damages” to the U.S. economy, people, and ecosystems, he added.

Authors and reviewers said the new report also dives much deeper into the region-by-region impacts of climate change—encompassing the costs of a warming world to economic sectors, how extreme weather events might intensify in a region, and the public health damages that could result.

The report isn’t a prescription for policy, but it offers city and state actions that climate scientists say other decision-makers can readily adopt.

The granular, regional focus was deliberate, in response to calls from local and state politicians to make the report more salient for them, climate scientists said. And ensuring that those decision-makers can use the climate assessment to set policy is even more significant now that the Trump administration is undoing most federal climate policies, dismissing the science, and cutting funding for climate-related efforts, scientists added.

Many cities and states “see that gap being caused by federal leadership,” Rachel Licker, senior climate scientist with the Union of Concerned Scientists, told Bloomberg Environment. They are questioning what more they can do, “and this is going to help them figure out those next steps.”

Part of what advances this assessment is its framing of climate risks as interconnected, and often compounding, climate scientists said.

Previous climate assessments looked at various impacts, such as extreme weather events or public health, in isolation, Kristie Ebi, a global health professor at the University of Washington’s Center for Health and the Global Environment in Seattle, told Bloomberg Environment. That made it difficult for regional policy makers who consider climate effects on their areas simultaneously.

City policymakers “have to look at that total package,” Ebi added. “It’s important to have these regional areas of focus so that they can get a better sense of the totality and the timing of how risks are shifting, how quickly we need to act, how to help them respond in the face of limited funding for investment.” 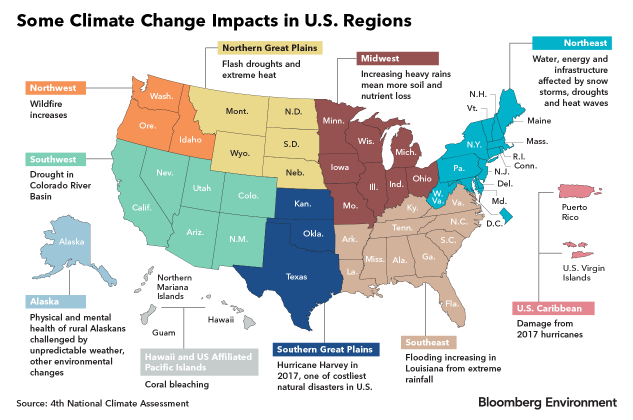 Such a dynamic can also help decision-makers determine what to prioritize, Ebi and other scientists said.

“Climate change is affecting certain resources first and more severely,” Patrick Gonzalez, a climate scientist and associate adjunct professor at the University of California, Berkeley, told Bloomberg Environment. That also varies by region, but the assessment gives decision-makers a sense of how much their region is exposed to climate change, added Gonzalez, who served as a coordinating lead author for the assessment’s Southwest chapter.

The report, for example, “allows a county executive to realize that wildfires are more of a risk than invasive species or that maybe heat-related deaths might be more important than wildfires,” Gonzalez said. “It allows that type of prioritization, and hopefully gives some examples from others to adopt.”

Any ramping up of action among states and cities will still be diluted by a lack of federal focus on climate policy and investment.

The report “only underscores the importance of federal leadership,” Licker said. “It’s clear that we need all hands on deck at the moment. It’s not really a moment for the administration to be abdicating leadership.”

The White House didn’t immediately comment when the report was released.

But federal scientists told reporters the government does offer resources to state and local officials.

For example, the Department of Agriculture has a network of 10 regional climate hubs that can help states and local communities build resilience within the agriculture and forestry sectors, William Hohenstein, director of the department’s Climate Change Program Office, said.

Part of the leadership gap could be filled by a Democratic-led House. The incoming chairs of the House Science, Energy and Commerce, and Natural Resources committees recently announced they will hold a series of climate science hearings in early 2019.

The incoming Democratic-led House should use the assessment as a blueprint, Andrew Light, a senior fellow in the World Resources Institute’s global climate program, told Bloomberg Environment. He suggested a series of hearings examining whether the United States is adequately preparing for climate change, not only at the federal level but also the state and local level.

Light served as the review editor for the report’s chapter on climate change mitigation.

“At the moment, it’s a pretty uneven landscape,” Light said. “Some states are moving forward, some cities, but there’s not enough with respect to federal guidance on this issue.”

(Adds comments from federal scientists in fifth and 22nd paragraphs.)