A chunk of aluminum about the size of an aspirin tablet could strike a spacecraft with the force of a 400-pound safe traveling at 60 miles per hour.

Like the plastic collecting in Earth’s oceans, junk like paint flecks, nonfunctioning spacecraft, defunct satellites, and rocket boosters have accumulated in Earth’s orbit over 60 years of space flight. For all the damage that tiny chunks of debris can create, there are 34,000 objects 10 centimeters or larger that pose an increasing threat to survival in space.

No comprehensive strategy has been drawn up to clean the debris even as more satellites are likely to enter orbit, with the creation of President Donald Trump’s Space Force. The space-junk “plan” as it now stands is: detect it and fly around.

“It’s been U.S. space policy for about 10 years now that we will be actively trying to clean up space debris, except that we haven’t taken any steps to do so. No money has been set aside, no one’s assigned to do it,” said Ted Muelhaupt, associate principal director for systems analysis and simulation at The Aerospace Corp. in Chantilly, Va..

The U.S. government “should pursue active debris removal” as a long-term approach to managing space waste, along with safety guidelines for mitigating, removing, and tracking waste, the White House said in a June 2018 space policy directive. It has yet to release a plan for doing that, though it could in its departmental budget requests due out this month.

Although much of the larger debris orbiting the Earth is tracked, the problem won’t improve without creating new standards and practices for mitigating and disposing of space waste, researchers said.

The average speed of orbital debris striking another space object is about 6 miles per second, or 21,600 miles per hour, according to the National Aeronautics and Space Administration. 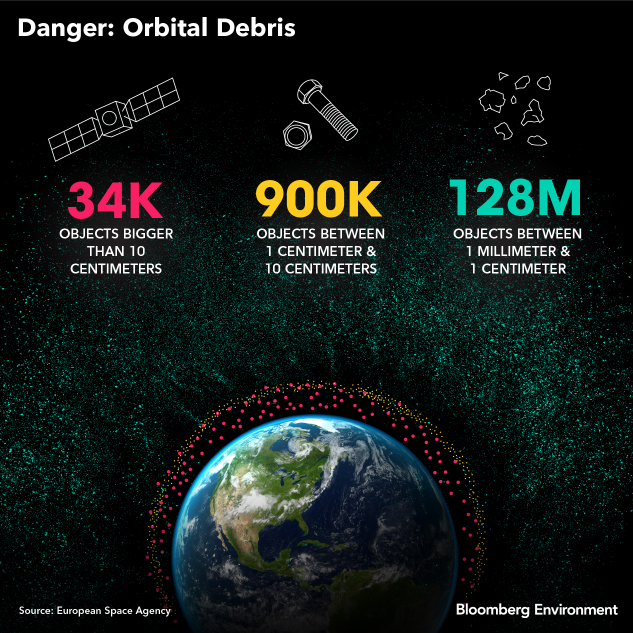 “There’s no space cop or space guard, and even the Space Force isn’t going to be tasked to do that,” said Moriba K. Jah, associate professor in the aerospace engineering and engineering mechanics department at the University of Texas at Austin.

Space debris is any human-created object that is no longer useful. It has accumulated as satellites become obsolete and space shuttle missions leave objects behind.

“People thought, space is so big, who cares about rubbish,” said Guglielmo Aglietti, director of the Surrey Space Centre at the University of Surrey in the United Kingdom. “We had a bit of a careless attitude.”

The inception of commercial space transportation services through companies such as SpaceX and planned constellations of hundreds of satellites such as OneWeb have increased space activity, Muelhaupt said.

“They’re forming a new environment that we haven’t seen before,” he said.

With so many pieces of debris to navigate around, it can be hard to tell which ones are the most hazardous to astronauts or satellite operations, Jah said. The possibility that a piece of orbiting debris strikes and destroys the International Space Station is one of the greatest risks to the crew’s survival, according to a 2018 Government Accountability Office report.

“The problem is that we haven’t been able to quantify the benefit of removing any specific piece,” Jah said.

Intelsat, which operates a satellite network for services like broadband internet and video broadcasting, has about 50 satellites in its fleet and flies additional satellites for other companies, according to a spokeswoman for the company.

“Even a small collision could destroy your satellite,” Froeliger said.

The company gets notifications a couple times per week that objects are within about 12 miles of one of its satellites, he said. The maneuvers may create additional work for people on the ground, but don’t disrupt the satellite’s operations.

“There’s a lot of business on Earth that’s depending on satellites, and we want to avoid any mishap,” he said.

In a space environment where some debris is too small to be tracked, and national security assets try to stay off the radar entirely, new waste navigation rules will need to be written, Muelhaupt said.

Trump’s June 2018 directive on managing space traffic said the federal government should create “minimum standards for safe operation and debris mitigation,” but doesn’t say how, or who should take charge.

“There are laws of the sea and you have rights of free passage, and you still don’t want to put your sailboat right up next to an aircraft carrier,” Muelhaupt said. “There are still rules that have not been established in space.”

The Federal Communications Commission has some rules for satellites it licenses, including limiting their post-mission lifetimes to 25 years. Operators must also assess the probability of their satellites becoming space junk if they’re hit by debris.

Both SpaceX and OneWeb have committed to controlling the lifespan of their satellites by letting them fall out of orbit and burn up in the Earth’s atmosphere once they become obsolete. SpaceX expects its satellites to be useful for five to seven years, according to Federal Communications Commission documents.

The FCC is drafting new rules for mitigating orbital debris, but the waste problem isn’t likely to be solved by one country alone.

Cleaning up our hazardous space waste “will necessarily involve not only a multi-agency approach, but an international effort,” J.D. Harrington, spokesman for the National Aeronautics and Space Administration, said in an emailed statement.

Satellites that have come to the end of their useful lives can be disposed of by being directed further away from the Earth, where they’re less likely to run into things.

“It’s called graveyard orbit, because that’s where all the dead satellites end up,” Froeligier said.

“Remediation, where we actively go do something, that’s going to take some bucks,” he said.

With sponsorship from the European Commission, Aglietti’s project, called RemoveDEBRIS, launched a prototype in 2018 that used a net to catch a piece of space debris. The technology uses a satellite platform, propelled via rocket to the International Space Station, that is put into orbit around the Earth. The net is fired from the platform, wraps around the piece of waste, and is reeled back in.

The barriers to using the technology on a wider scale include the density of the orbital junkyard and finding funding, but there is “growing interest,” he said.

“In the space community, we all agree it would be a good idea to do a little cleaning up,” he said.

A Space Force that attacks enemies by destroying their vehicles wouldn’t help the waste accumulation, but Aglietti sees explosive battles as the stuff of science fiction. “That would produce a cloud of debris, and it’s impossible to control,” Aglietti said.

A spokeswoman for the Air Force Space Command referred Bloomberg Environment’s questions to the secretary of the Department of Defense, who did not respond to a request for comment.

Muelhaupt expects the Space Force to consider its environmental impact on the existing orbital junkyard.

“I would guess the Space Force would be very, very cognizant of their image,” Muelhaupt said. “They’re not going to want any messes.”

(Adds detail on speed of space waste in 8th paragraph.)