Just four years ago, an estimated 40 million households in India were still living without access to electricity and more than 100 million were using wood or cow dung for cooking, according to the Council on Energy, Environment & Water think tank in Delhi.

During the past 17 months, the government has been reaching out to connect the most remote areas of the country, tasking workers with carrying electric poles, transformers, and wires on their heads for days, or moving materials by helicopter, boat, or across rope bridges.

Under its Saubhagya ("good luck") scheme, for which the government set aside 163 billion rupees ($2.3 billion), “India has connected 25 million households in a record time,” said R.C. Joshi, spokesman for the Ministry of Power. “At the project’s peak, we were lighting up an average of a hundred thousand houses every day,” he added. “Now only 19,836-odd households are remaining and India will be 100 percent electrified soon.” 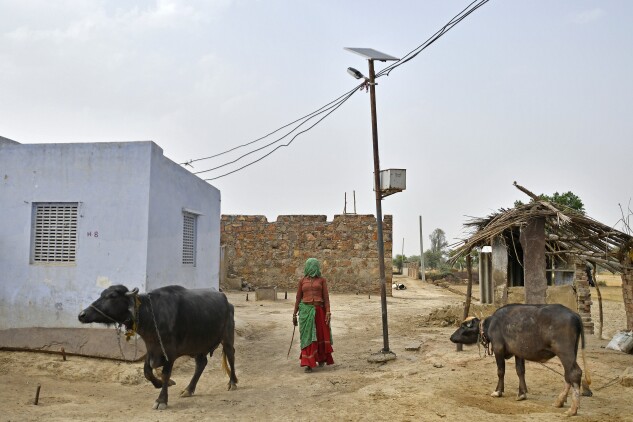 A villager walks past a solar powered street light in a village on the outskirts of Alwar, Rajasthan, India.
Photographer: Anindito Mukherjee/Bloomberg via Getty Images

The next step will be to ensure that electricity runs continually in every household 24 hours a day, something that would put an end to power scarcity in rural areas that so far have remained underserved, but will likely prove much more difficult than laying cables across India.

The goal could be achieved through a new tariff policy, currently with the administration in draft form. The measure would penalize distribution companies when a power outage occurs without a valid reason, such as scheduled maintenance or natural disasters.

According to the draft, the policy was scheduled to enter into force starting April 1, but it hasn’t been officially launched. And once the date for the upcoming general election is released, under Indian law the ruling party won’t be allowed to announce new projects until after the vote, delaying operations even longer.

When asked about Saubhagya and the plan to provide stable electricity for all, the Rural Electrification Corporation Ltd.—a lead provider of finance for energy projects operating under the Ministry of Power—refused to comment.

According to Joshi, however, India has already set up most of the infrastructure needed to achieve that target.

“We have created overcapacity for our demand,” he said. “In terms of transmission, we can now transfer power seamlessly from one corner of the country to the other.”

But connecting every corner of the country doesn’t mean that electricity will be available to every household, explained Abhishek Jain, energy access program lead at the Council on Energy, Environment & Water.

“Ending energy poverty in India is still a long distance away from reality,” he said. “Access to and lack of energy are concepts that keep evolving over time as aspirations and demand increase.” 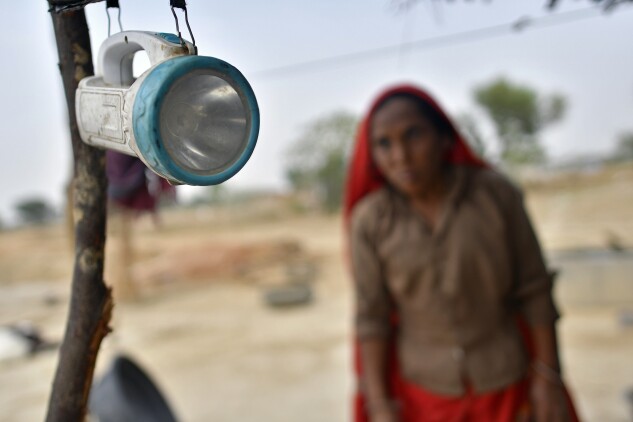 A torch hangs from a home with no household power in a village on the outskirts of Alwar, Rajasthan, India.
Photographer: Anindito Mukherjee/Bloomberg via Getty Images

Jain’s recent research looked at electricity access through a set of indicators capturing not only capacity but also duration, quality, reliability, and affordability of the electricity provision. The research—which surveyed rural households across six of the major energy-scarce states in India—found that while electrification improved dramatically during the past year and a half, about 50 percent of the families surveyed still receive energy for less than the average 16 hours a day.

“It’s not uncommon for rural households to go without electricity for two, three days in a row,” Jain said.

This is mostly due to maintenance issues, he said. Once something breaks in a remote place, it takes a long time to get it repaired.

“So how we proactively ensure maintenance for these assets is a key element of a steady energy supply,” Jain said.

Distribution is the area where India still needs reforms.

“Our focus is to improve financial health of our distribution companies, so that they are able to purchase enough power to supply 24/7 power to every household under their area of jurisdiction,” said the Ministry of Power’s Joshi.

One example is the lack of an efficient metering system, which makes it difficult for a provider to work out how much electricity each household consumes per month. That is why debt-ridden distribution companies are discouraged from investing in rural areas.

“In a city, a single meter reader is able to cover over 100 households in a day,” Jain said, “but where homes are scattered over a vast area, often the effort is not worth it.”

The government of Prime Minister Narendra Modi is hoping to remedy this by replacing all electric meters with smart prepaid versions, which will enable customers to top up much like they do with a mobile phone. The program has just taken off with a pilot in Delhi—where 50,000 units have been installed—and will expand to the whole of India during the next three years.

To solve the electricity access problem, Jain said, India doesn’t need more energy. “If you look at how India can do today in terms of generation, it can easily meet all the energy access needs.”

The problem, he said, is how to make sure that the energy reaches every single household.

“Going forward, we do see a role for more decentralized renewables coming in to plug the gaps that we are discussing in an access, including last-mile solar coming in along with the grid,” he said.

To contact the reporter on this story: Lou Del Bello in Delhi at correspondents@bloomberglaw.com