Pressure is mounting to phase out a decades-old class of insecticides linked to developmental delays and behavior problems in children, but rising use in the developing world could complicate activists’ efforts to ban them.

Use of organophosphates has dropped in the U.S. and select countries in Europe and East Asia during the past decade, according to figures from the U.N. Food and Agriculture Organization and the U.S. Geological Survey.

Use remains steady—even rising—in the developing world. Overall imports of pesticides in the 50 least-developed countries jumped by 65 percent between 2006 and 2016, according to FAO data. As many older pesticides come off-patent, local production of organophosphates—such as the neurotoxin chlorpyrifos—becomes cheaper and more accessible.

Azinphos-methyl is one organophosphate that persists despite bans. The pesticide, originally developed by Bayer Crop Science and sold under the trade name Guthion, was phased out between 2006 and 2013 in the U.S. and banned in 39 other countries.

Yet traces were still found in a recent Food and Drug Administration survey of more than 7,000 food samples that included corn, soybeans, and potatoes.

Citing broad exposures and risks to children’s health, a coalition of environmental health and child development advocates has formed a project called Targeting Environmental Neuro-Development Risks (TENDR) and is seeking to reverse the trend and ban the insecticide worldwide. 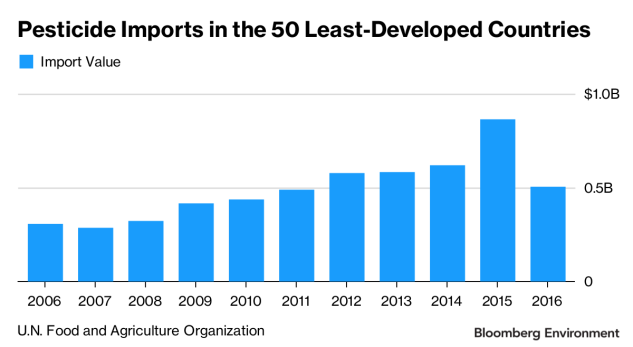 But the phaseout campaign faces challenges from users and trade specialists who point to the chemical’s efficacy in fighting pests.

Organophosphates such as malathion, diazinon, and chlorpyrifos in particular are prized by farmers who use the pesticide in a suite of products to help stave off insects’ resistance. Older pesticides are getting less expensive as more companies are able to produce the chemicals on a bigger scale, increasing supply and lowering the price.

Developing countries “are not [importing] those advanced molecules that are safer and have less of a footprint on the environment,” said Islam Siddiqui, a senior adviser with the Center for Strategic and International Studies and a former agricultural trade negotiator in the Obama administration.

Organophosphates kill bugs by suppressing a necessary enzyme for nerve function and have persisted for decades because they target pests and eliminate them when other tools fall short. But environmental advocates—supported by population health studies performed in the past 20 years—say long-term health effects in children are far more problematic, causing brain problems that can lead to low IQ, learning disabilities, and other setbacks.

Project TENDR scientists published a paper in the journal PLOS Medicine on Oct. 24 calling on governments to phase out the chemicals and urging health professionals to educate the public on the risks. The widespread use of organophosphates in agriculture, the authors wrote, “has led to ubiquitous human exposure.”

“It’s a very multidimensional kind of problem,” said Irva Hertz-Picciotto, lead author of the paper and a professor of public health at the University of California, Davis. She directs a large population study on the environmental factors that affect autism in children. “They’ve been the dominant pesticide class for several decades now.”

Chlorpyrifos was first developed by Dow Chemical Co. and is manufactured by ADAMA, BASF SE, Cheminova, and other companies. It is frequently used on fruit and nut trees, vegetables, and grain crops as well as on golf courses, in greenhouses, and on wood products. 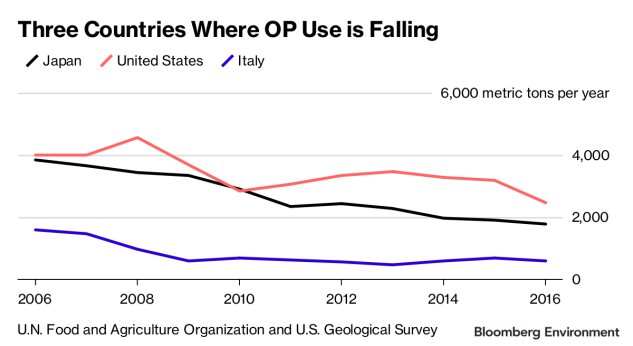 In the United States, the passage of the 1996 Food Quality Protection Act led to a dramatic reduction in organophosphate use, according to the paper.

The law amended the Federal Food, Drug and Cosmetic Act and the Federal Insecticide, Fungicide and Rodenticide Act to require the EPA to apply a more protective safety factor when measuring a pesticide’s effect on children and pregnant women. The EPA also reached an agreement in 2000 with chlorpyrifos manufacturers to ban sales of home, lawn, and garden uses of the compound.

Organophosphate pesticide use dropped by more than 70 percent between 2000 and 2012, according to the paper, citing an EPA report. The amount of organophosphates on food decreased by 57 percent. Of 47 organophosphates registered, 26 of them are no longer in use in the U.S. 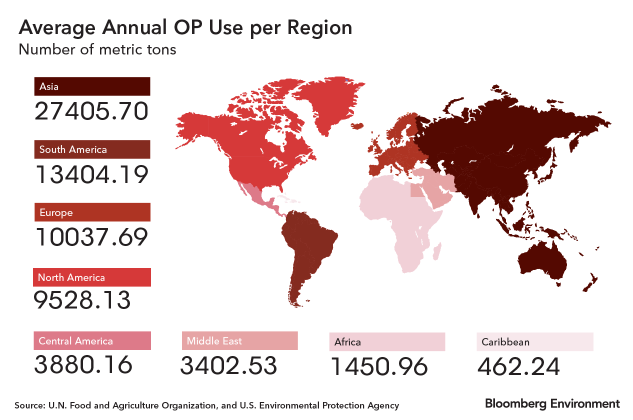 In 2016, the EPA concluded that chlorpyrifos exposure through food and drinking water posed an unacceptable risk to children and women of reproductive age.

The agency took steps to revoke all legal limits of the chemical on food, an effort that was reversed in the first year of the Trump administration. The EPA has said it will reconsider the status of chlorpyrifos in 2021.

In the European Union, 33 organophosphate pesticides have been banned, but chlorpyrifos remains on the market, with consistent use in Spain, Portugal, and France. The EU will consider extending the approval of chlorpyrifos next year, and environmental groups are campaigning for a ban.

The European Food Safety Authority is expected to deliver a peer-reviewed report on the health effects of the pesticide in a few months, Hans Muilerman, chemicals coordinator for pesticides and alternatives at the Pesticide Action Network-Europe, said. 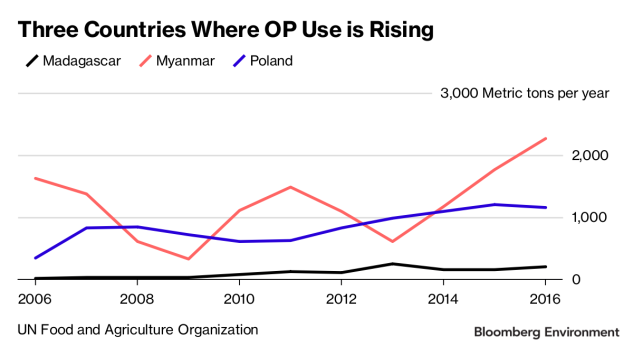 “If this is very negative on chlorpyrifos, a phaseout might happen,” Muilerman told Bloomberg Environment. “But even in that case, there will be a few member states like Spain who will object to a phaseout.”

A ban in Europe could force manufacturers to offload their stock elsewhere, particularly in the developing countries where demand is growing.

When restrictions increase in one country, “you start toggling your distribution,” Taveau said of pesticide makers. “You start selling in other places.”

To contact the reporter on this story: in Washington at tstecker@bloombergenvironment.com