Five electric school buses in the White Plains, N.Y., school district are equipped with bidirectional inverters, so they can store energy and feed back into the state’s power grid as part of a pilot program headed by Con Edison.
Photo credit: Keshia Clukey/Bloomberg Law

There’s no revving as the engine of yellow school bus number 772 accelerates uphill, and no fumes as it pulls into the parking lot of a White Plains, N.Y., elementary school.

“Oh, it’s the electric bus!” one student exclaims, jumping up and down with his friend—two of the lucky ones who get to ride it home.

Little do they know it’s not just any electric bus, it’s also a battery on wheels, one of five in the state as part of New York electric company Con Edison’s vehicle-to-grid pilot program based in the White Plains district.

The Lion Electric Co. buses are equipped with bidirectional inverters, meaning they can charge the bus, or store energy and feed back into the electrical grid, taking cues from smart software technology and chargers developed by San Diego-based Nuvve Corp.

Starting this Thanksgiving break, while the students are home with their families, the parked buses’ batteries will be put to work, feeding back into the power grid to supplement supply.

Consolidated Edison Co.'s goal is to use the energy stored in the batteries to support the grid during the hot summer months, when demand is at its peak. The company is expected to get 75 kilowatts of power during the summer months from the five bus batteries. If successful, the project could be replicated in other districts.

Bus operators remain skeptical, with electric buses costing nearly four times that of their diesel counterparts. They also worry about whether the batteries have the range to make longer routes, or get kids home safely when traffic is delayed by snow.

“What we are trying to do is provide a lot of information that will hopefully be reassuring to bus operators that A, electric buses work as transportation, and then B, you can perform vehicle-to-grid at minimal impact to your vehicle,” said Ari Kahn, project specialist for Con Edison’s electric vehicle demonstration program.

The pilot project comes as states like New York and California look to reduce carbon emissions in an effort to meet ambitious goals to address climate change.

Nearly 10% of all yellow school buses operated nationwide, or about 45,600 vehicles, are based in New York, more than any other state, according to the most recent data from School Bus Fleet, a trade publication.

A complete transition of New York City and Westchester County’s school bus fleets from diesel to electricity alone could eliminate 185,000 tons of carbon dioxide annually, according to Con Edison. 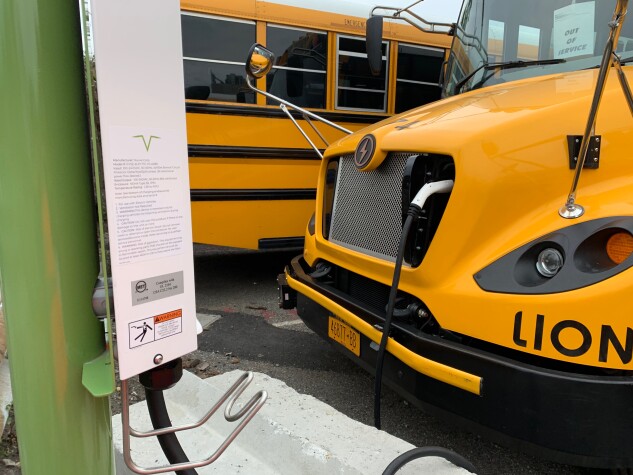 California has been leading the diesel-to-electric shift nationally with vehicle-to-grid technology for buses, including a 2014 pilot program in the Torrance Unified School District. The California Public Utilities Commission this summer approved the purchase of 10 more vehicles for the region.

Virginia, however, may take the lead. State Gov. Ralph Northam (D) Sept. 24 announced a $20 million initiative to help pubic school districts switch to all-electric school buses. The program would reimburse districts up to $265,000 for the purchase of an all-electric bus, including charging infrastructure.

Dominion Energy Virginia on Aug. 29 announced plans for the largest electric school bus deployment in the nation, with the goal of having 50 buses with vehicle-to-grid capability running by the end of 2020. Phase two would expand to 1,000 electric buses by 2025.

Power producers and districts in other states including North Carolina and Florida also have proposals for their own programs.

Using school buses for vehicle-to-grid interactions is one of the better business models, and it’s been taking off in the last few years, said Darlene Steward, an engineer with the National Renewable Energy Laboratory in Colorado.

There’s a large focus in the industry on the use of vehicle-to-grid with personal cars, but the use of large fleets is more consistent, she said. “School buses have great big batteries, so they can provide more of that steady power.”

Whole fleets of them are parked for long periods of time in a specific location, so they can be a guaranteed source of energy, she said.

There are also health benefits in switching to electric school buses, as they have zero emissions and don’t expose children to exhaust, Steward said.

Having large fleets of electric school buses with vehicle-to-grid capabilities could stimulate the growth and use of other intermittent renewable energy sources in the market, said Jordan Schnell, a postdoctoral fellow in Northwestern University’s Department of Earth and Planetary Sciences.

“If the power company knows that they have this extra essentially capacitor, this battery in their system, then more renewables can be put into the system without fear that it’s not going to be there when demand is there,” he said.

A Bump in Road

McPherson said he’s seen the cost of materials and maintenance slashed by more than half on the electric pilot buses, compared to his diesel fleets. They don’t require gas, there’s no oil, no belt, and no air filters to change, he said. National Express is also paid by Con Edison for the right to use the buses as a grid asset.

Though the benefits are high, so are the initial costs to purchase an electric bus, and to put in smart chargers. An average full-size diesel school bus costs anywhere from $95,000 to $100,000, McPherson said. Each electric bus in the pilot, manufactured by Saint-Jerome, Quebec-based Lion Electric Co., costs $365,000, according to Con Edison.

The drivers also need to be re-trained to drive an electric bus, which includes learning how to maximize power usage.

The costs for the pilot program are being shared between Con Edison, National Express, and the New York State Energy Research and Development Authority.

Multiplying that by fleets of hundreds of buses makes it challenging to convert to electric, even with grants, without passing on costs to the customers, said Corey Muirhead, president of the New York School Bus Contractors Association. “You have to re-do your entire facilities to support something like this.”

Muirhead is also concerned about the range of the battery, as getting the students where they need to be safety is paramount. “It has to be cost-effective and has to make sure that logistically my operation will run at 100% like it needs to be,” said Muirhead, who also is executive vice president of Logan Bus Company Inc. & Affiliates, serving New York City and Long Island. Some of his bus routes to Long Island are 60 miles one way, he said. 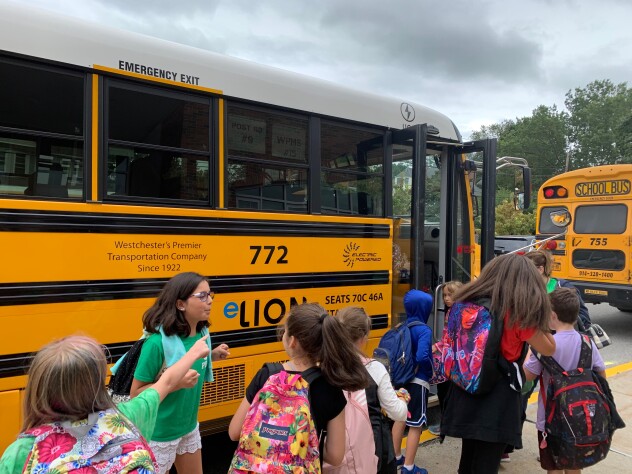 Post Road Elementary School students pile onto an electric school bus Sept. 6, 2019, in White Plains, N.Y. The bus is one of five as part of a Con Edison pilot program that uses the buses’ batteries when not in use, to feed back into the state’s power grid.
Photo Credit: Keshia Clukey/Bloomberg Law

Nick Vallone, a member of the bus contractors association’s executive committee, also worries about range, pointing to a snow storm last November where he said some electric buses were stranded in the New Jersey-New York City area, having run out of power. The buses need heat in the winter and air conditioning in the summer, which increase the power demands, said Vallone, who also owns VP Buses, a New York-based transportation company.

“First things first is getting kids to school in an efficient manner. What that project is geared toward is a secondary benefit,” he said, adding that no one has yet taken the electric vehicle-to-grid school bus model to scale.

Many contractors, like Muirhead and Vallone, will be watching the pilot for data.

Con Edison recently hosted a symposium for bus operators in the state to address some of these concerns and get stakeholders to the table, Kahn said, adding that battery costs continue to decline and battery ranges are getting better.

Electric vehicles are expected to become cheaper than their combustion-engine equivalents by as early as 2020, according to a BloombergNEF analysis. The battery made up more than 57% of the cost for a mid-sized car in the U.S. in 2015, according to the report. It now makes up 33%, and by 2025 will be 20% of the total vehicle cost.

If operators see the electric buses as a viable option, it will allow manufacturers to scale up their production and sell them more cheaply, said Steward, from the National Renewable Energy Laboratory.

To contact the reporter on this story: in Albany, N.Y. at kclukey@bloomberglaw.com