House Democrats from districts reliant on oil and gas production are distancing themselves from a new bill to ban fracking even though the measure is unlikely to gain any traction in Congress.

The bill (H.R. 5857) would end the use of fracking, or hydraulic fracturing, a method for removing oil and gas from shale, by 2025. The measure sponsored by Rep. (D-N.Y.), is a counterpart to legislation () introduced by Sen. (I-Vt.), one of the leading candidates for the Democratic presidential nomination.

The National Republican Congressional Committee already is attempting to tie Sanders’ sponsorship of the proposed ban to vulnerable Democrats, such as Rep. (D-Pa.), who represent districts where fracking is a big job generator and President Donald Trump is popular.

“Our candidates are going to spend their entire time distancing themselves from the nominee” if it’s Sanders or Sen. , said Colin Strother, a Texas-based Democratic strategist, who sees fracking as one of several issues where progressive and moderate Democrats are divided. 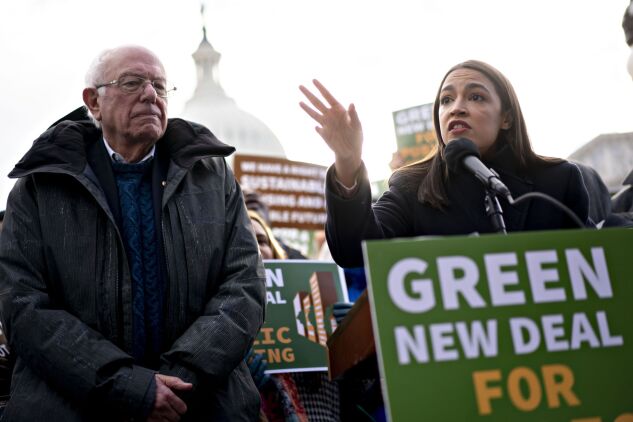 Sen. Bernie Sanders (I-Vt.) and Rep. Alexandria Ocasio-Cortez (D-N.Y.) speak during a news conference outside the Capitol on Nov. 14, 2019.
Photo by Andrew Harrer/Bloomberg

The NRCC sent out a February 13 email blast saying the bill “follows a disturbing trend for Conor Lamb’s Democrat Party, which is waging war against the fossil fuel industry and the millions of jobs it provides.” One day later, Lamb called out Sanders and Ocasio-Cortez in a tweet, saying that “in the most important election of our lives” the two lawmakers “are celebrating a bill that would eliminate thousands of good union jobs in #PA17 & across PA — a state we need to win.”

Texas Rep. called the legislation “misguided” and defended fracking as a “a critical contributor to an energy renaissance that has made the United States the global leader in energy production.” Rep. , a fellow Lone Star State freshman, said the ban would “cost Texas thousands of good-paying jobs.”

House Republicans have also attempted to use procedural moves to force some of those lawmakers to vote on preventing a federal fracking ban. When two freshmen Democrats — of Oklahoma and of New Mexico — voted with Republicans one time and against them another, the NRCC released a statement for each congresswoman, saying each was “joining her socialist colleagues in defeating the Republican effort.”

Tensions around fracking between progressive and moderate Democrats were on display at Wednesday night’s Democratic presidential debate, when Sanders said bold action was needed or ”there will be irreparable damage done not just in Nevada, not just to Vermont or Massachusetts, but to the entire world.”

Other candidates, including Joe Biden and Michael Bloomberg, pushed back. “If we could enforce some of the rules on fracking so that they don’t release methane into the air and into the water, you’ll make a big difference,” Bloomberg said. “But we’re not going to get rid of fracking for a while.”

Bloomberg is the majority owner of Bloomberg Government’s parent company.

The fracking ban is one example of the issues Republicans will use to tie Democrats to Sanders should he be nominated. An NRCC poll conducted Feb. 11-13 and released Friday found Sanders unpopular in the 95 most-competitive congressional districts. Only 42% held a favorable opinion of him, and he trailed Trump in a hypothetical matchup, 48-43%.

For House moderates, drawing clear distinctions between themselves and the more progressive members of their party has become part of their re-election strategy, said Brian Sanderoff, president of the Albuquerque-based Research & Polling, Inc.

He pointed to Torres Small, whose district includes parts of the Permian Basin. She said in a statement responding to the bill that “if we shut down oil and gas drilling in New Mexico today, we’d have to shut down our schools tomorrow.”

“She’s able to use this issue as an example to demonstrate her independence from the liberal Democrats in Congress,” Sanderoff said. “This is a perfect way for her to position herself as someone who can be independent.”

Republicans’ attempts to brand all Democrats as progressives are not only inaccurate, Horn said in an interview with Bloomberg Government, but also prevent real work from getting done. She and other freshmen from swing districts are using the bill to push for solutions on energy and environmental issues that can attract bipartisan support.

Lamb, who tweeted that the “bill would eliminate thousands of good union jobs,” asked in a letter for Speaker to reject the ban and instead pass a bipartisan bill () expanding federal research and development programs for fossil fuels.

Horn, one of the most endangered House Democrats, said it’s critical “to have realistic conversations about how we address these important and challenging issues and find places to work together both across the aisle and within the party.”

“It’s not helpful to have these sorts of all-or-nothing proposals painted with such a broad brush to include people who don’t agree with it,” Horn added. “It means we’re not taking steps forward to create solutions that we could reach across the aisle to do.”

To contact the reporter on this story: in Washington at ewilkins@bgov.com

To contact the editors responsible for this story: at bkohn@bloomberglaw.com; at ktrygstad@bgov.com