A view of broken trees on the beach near the Bolongo Bay Beach Resort on St. Thomas, U.S. Virgin Islands, after Hurricane Irma made landfall on Sept. 18, 2017.
Photographer: Chip Somodevilla/Getty Images

Superfund sites hit by hurricanes in 2017 generally held up in the face of tropical-force winds and flooding, the EPA said in a report.

The Environmental Protection Agency collected data on how Hurricanes Harvey, Irma, and Maria affected cleanup progress at more than 250 Superfund sites in the storms’ paths. The agency determined those sites remained “resilient” despite the destructive storms.

Sites listed on the EPA’s National Priorities List, also known as Superfund sites, are the most contaminated in the country. The agency developed the report to decide whether it should adjust its efforts on climate change adaptation for Superfund sites.

The agency posted the report on its website Feb. 22 after Bloomberg Environment filed a Freedom of Information Act request for the document. The report is dated August 2018.

More than 250 sites were flooded, hit with strong winds, or both, according to the report.

Reported damage was “minor,” the EPA said, and was limited to 16 sites. That damage ranged from erosion of a reinforced cap over contaminated waste at the San Jacinto River Waste Pits site near Houston, to power outages that stopped a groundwater treatment system at the Tutu Wellfield site in St. Thomas in the U.S. Virgin Islands.

Divers from EPA’s regional office inspected the damaged cap and collected samples to test for dioxin, one of the contaminants under the cap. One sample confirmed “high dioxin concentrations,” according to the report. The companies working on cleanup at the site, McGinnes Industrial Maintenance Corp. and International Paper Co., maintain that the cap didn’t leak.

The EPA’s cleanup plan for that site, which former Administrator Scott Pruitt completed in October 2017, is to excavate much of the waste rather than continue to use the temporary cap.

“I think that is really going to be what the future looks like,” Villa said. “All the things you thought you could cap in place safely—you really need to get it out of there before the next storm hits.” 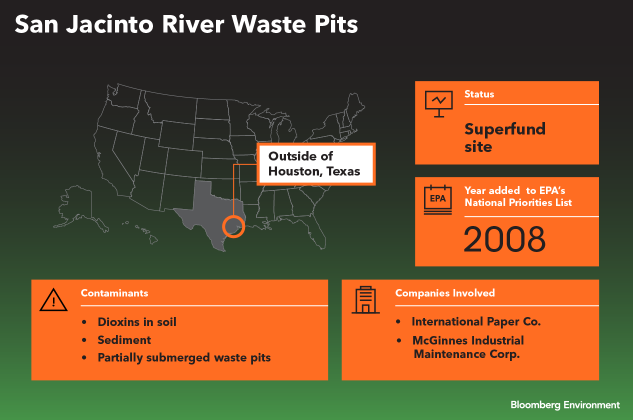 At the St. Thomas site, the groundwater and soil vapor cleanup systems had been built “with the local weather conditions in mind,” according to the EPA report. The systems are in “hurricane proof structures” with concrete walls, roofs, and doors.

Those structures “remained intact but sustained a five month long loss of power due to area wide utility damage,” the report said.

The report is one of the tacit ways the EPA acknowledges the need to adapt to climate change, he said.

“There’s none of that political quibble in here,” he said.

She said the EPA’s report is “a good start,” but would be more valuable if it took a comprehensive approach and considered information from other sources about the hurricanes’ effects.

Hurricane Harvey hit the Texas coast on Aug. 25, 2017. Hurricane Irma blew through the Caribbean, passing north of Puerto Rico on Sept. 6, 2017, and made landfall in Florida Sept. 10.

Hurricane Maria was the strongest hurricane to hit Puerto Rico since 1928, according to the EPA report. Maria crossed Puerto Rico’s southeast coast on Sept. 20, 2017.

(Updates with additional reporting throughout.)