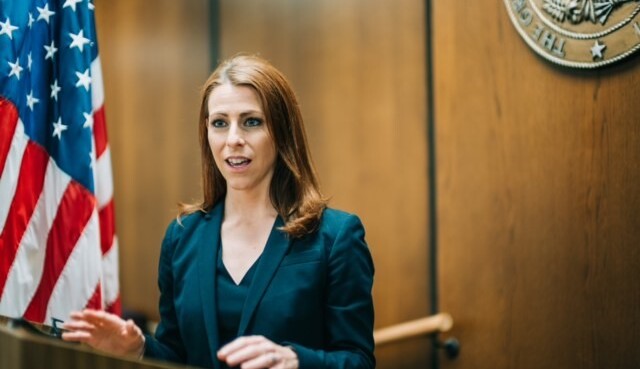 Mandy Gunasekara is the founder of the Energy 45 Fund, a nonprofit that promotes President Donald Trump's re-election efforts.
Photo courtesy of Mandy Gunasekara

President Donald Trump’s self-described environment and energy ambassador sees herself as a walking retort to the administration’s biggest detractors.

“Democrats try to paint the picture that women and minorities don’t support the president,” says Mandy Gunasekara, a former EPA official. “They actually do. Democrats have tried to make that a political point, and I can prove them wrong just by showing up.”

Gunasekara is young—34—and bluntly offers, “It helps that I’m a woman.”

Republican strategist Mike McKenna agrees: “It’s much better than having a Republican banker man sent down from central casting.”

Gunasekara is no longer working for Trump, at least not officially. But she says her new organization, the Energy 45 Fund, plans on helping him get re-elected by embracing his environmental record.

She also plans to branch out and try connecting with Democratic voters on outlets like MSNBC, she says.

‘Helps That I’m a Youngish Mom’

While Gunasekara may be a fresh face to many as she embarks on a media blitz in defense of Trump’s environment and energy record, she’s not a new face in Washington.

A deputy assistant administrator in the EPA’s Office of Air and Radiation before leaving the administration in February, Gunasekara played a role in arguably its most significant environment and energy actions.

She was among those pushing Trump to pull the U.S. from the Paris climate agreement, and she advocated for gutting and replacing President Barack Obama’s Clean Power Plan—the Obama administration’s signature climate change initiative and the nation’s first-ever plan to cut greenhouse gases from existing power plants.

In a subsequent interview, she offered a more nuanced opinion.

“I embrace the consensus that the climate is changing and support continuing to enhance our understanding of humans’ role,” she said. “What I reject are intrusive policies that masquerade as some ‘solution’ to our changing climate where they will have little meaningful impact on the environment, but massive costs to the economy.”

She says Democratic proposals such as the Green New Deal are too expensive and would have little effect.

“It helps that I’m a youngish mom. I have two kids,” she said. “I don’t think having children is a prerequisite for caring about the next generation, but having children does change your perspective on everything. As I work and think through the policies today, I think about how it’s going to impact their lives.”

Gunasekara was formerly an aide to Sen. James Inhofe (R-Okla.), and notably handed him a snowball on the Senate floor during a February 2015 speech. Inhofe lightly tossed the snowball as a prop in arguing that climate change concerns were overblown given the day’s cold weather.

“She’s doing exactly what every other spokesperson for this administration is doing, which is saying the climate has been changing since the dawn of time,” Gibson said. “But what she’s saying is so surface-level that I think it has the potential to irritate Republicans who consider themselves smart and thoughtful.”

Gibson pointed to a Reuters/Ipsos poll in June showing that 56 percent of Republicans and 71 percent of independents want the U.S. to act aggressively to stave off climate change.

Energy 45, based in Jackson, Miss., is a 501(c)(4) nonprofit, meaning it can promote political candidates as long as it can prove to the Internal Revenue Service that it works for the betterment of the nation.

The group also can engage in unlimited lobbying, and it doesn’t have to disclose its donors.

(Updated with additional comments starting in the 12th paragraph.)

To contact the reporter on this story: in Washington at stephenlee@bloombergenvironment.com